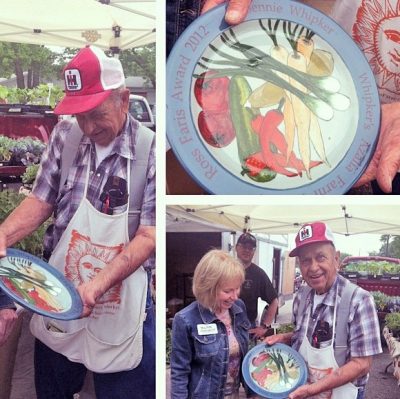 Bennie has sold produce in Indianapolis since 1995 and is one of the original vendors at the Broad Ripple Farmers Market. The award, presented by Todd Jameson of FarmIndy, included a $500 stipend.

Market Master, Barbara Wilder, (who is a member of the Ross Faris Award Advisory Committee), said the goal of the award is to celebrate Ross’s contributions to the local food movement as well as to honor a local grower/producer for their efforts.

Whipker acknowledged the profound influence Faris had on the local food community. You may remember that Ross Faris of Your Neighbor’s Garden, passed away last November.

The presentation of the award was made at a special dinner hosted by local chefs Greg Hardesty, Neal Brown, and Eli Anderson, at Hardesty’s Recess restaurant. The four-course meal was prepared from farmers market produce and served by volunteers from the BRFM.

The evening also included a silent auction. Proceeds from the dinner and auction will go to establish the Indiana Supplemental Nutrition Assistance Program (food stamps) at the Broad Ripple Farmers Market, a long-time goal of Ross Faris.