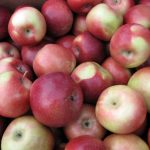 Gene Wild knew a lot about apples. He had an amazing 800 varieties on his 10-acre farm in Zionsville, Indiana; and about 3 dozen pear varieties as well. The orchard was started in 1985, and Gene began selling at farmers markets in 1990 (starting in Noblesville) and in 2001, Thursdays at 38th and Meridian. They began coming to the BRFM in 2006.

Gene found that the Market was the best way for him to bring his extensive apple “collection” to the public. When Gene passed away, David Boots and his wife took over the orchard where David had apprenticed with Gene.  Gene was highly regarded among his peers for his knowledge about apple varieties and apple history and he taught David well.

In addition to the tree-ripened apples and pears that are their specialty, Wild’s also has a large garden to provide produce before the apples ripen. They also press their own cider and sell it at the Market and last season they introduced their very popular cider donuts.