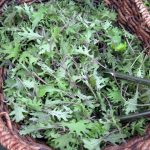 Meet the Farmers: Genesis and Eli

If you are ever tempted to say goodbye to city life, ditch your job and take up farming; here is the cautionary tale of a young couple who did just that.

Eli Robb and Genesis McKiernan-Allen had spent eight years in Portland, OR working and launching their lives together. During that time they fell in love with their local farmers markets and became enthusiastic backyard gardeners. They began dreaming of returning to the Midwest to try their hands at farming and so began saving their money and doing their research to make that dream come true.

In May of 2010 the couple moved to Iowa to begin a 2-year apprenticeship on a small sustainable vegetable farm. There they learned what it would really take to realize their dream. By the time their two years were up, Eli’s father had made them an offer they couldn’t refuse – some property he had purchased near Greenfield where they could put their newly-acquired skill-set to the test. In October of 2011 they planted their first garlic crop and there was no looking back.

A couple of years later they bought some property of their own in Noblesville where they now operate Full Hand Farm growing vegetables year-round for farmers markets and restaurants that are in the vanguard of the fresh local food movement. In addition to garlic they grow onions, radishes, chard, collards, arugula, lettuce, carrots, peppers, tomatoes, eggplant, broccoli, and herbs. And their latest addition is their littlest farmhand, son Ezra.

Now, five years after they embarked on this journey, Eli and Genesis can’t imagine doing anything else. They get to spend every day together with their baby boy doing something they love. For Eli who was raised in Brown County, the journey has come full circle. For Genesis who grew up in Indianapolis, she has been transformed from a city girl into a country wife and mother. Remember I said this was a cautionary tale. If you dream of an idyllic life of tilling the soil, you just might fall in love with it and never look back!

We are fortunate to have Full Hand Farm join us for their first season at the BRFM. Come see their beautiful produce at the Market. And keep up with the latest developments on the farm on their Facebook page here.