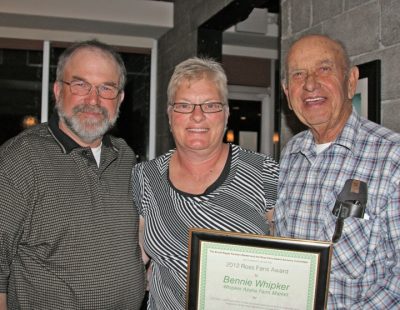 Son Keith, daughter-in-law Patty, and Bennie Whipker celebrate his being honored with the Ross Faris award.

The Azalia Farm Market booth will be vacant this week due to the funeral of Bennie Whipker, former owner of Azalia Farm and first recipient of the Ross Faris Award.

Bennie was one of the early vendors involved in the BRFM when it was at the Broad Ripple Brewpub. His son, Keith, who runs the farm and comes to the Market since Bennie retired, had the idea to get involved in a farmers market in addition to the farmstand they operated near their property. Once he got a taste of the Market though, he was there every week and loved interacting with the customers.

We’ve missed Bennie since his health began keeping him home from the Market. He was an integral part of establishing the BRFM, attracting other farmer vendors, and contributing to the local food movement here in Indiana.

Please keep the Whipker family in your thoughts and prayers.