Meals from the Market: Addictive Apples

You will truly get addicted to this apple crisp recipe that takes minutes to put together and throw in the slow cooker and then makes the house smell like autumn in heaven!

recipe from Gimme Some Oven 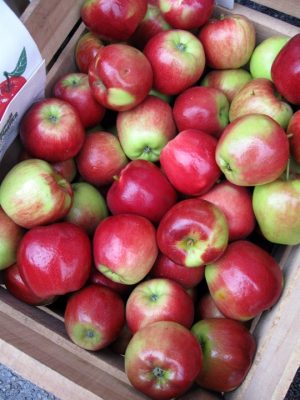 For the Apple Crisp

For the Cinnamon Oat Crumble

To Make the Apple Crisp

To Make the Cinnamon Oat Crumble

In a large mixing bowl (you can use the same one you used for the apples), whisk together the oats, almonds, flour, sugar, cinnamon and salt until evenly combined.  Drizzle the melted butter (or coconut oil) over the mixture, and then whisk until combined. Makes 8 servings. Optional serving suggestions– vanilla ice cream and warm caramel sauce

Using your towel with a slow cooker could potentially be a fire hazard, and you do so at your own risk.  The author of the recipe claims to have done it dozens of times without a problem.  But different cookers heat up to different temperatures.  So she recommends checking it an hour into cooking to be sure that the towel is not too hot. If using an instapot on slow cooker setting, check your user instructions for setting recommendations.

Try these easy apple ideas or check our recipe archive: