Meals from the Market: Party in a Pan

I saw Italian frying peppers at the Market recently and started looking for a good recipe to use them. This one makes a great side for steaks or chops on the grill. It’s very basic and easy, but could be added to and dressed up in a variety of ways.

recipe from Panning the Globe 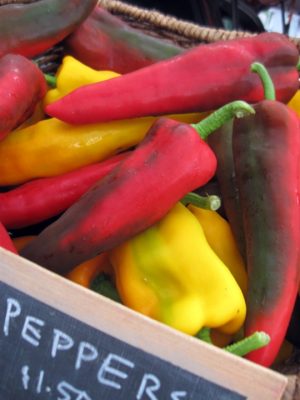 Cook’s Note: If you aren’t using russet potatoes, I think you could easily skip the whole bowl of cold water thing. You might want to cook them a little longer though. Large potatoes are easier to slice than the smaller ones, unless you want to skip the mandoline/food processor and use your knife skills.

I would not hesitate to add to this basic recipe. Chopped or sliced onion could be cooked in with the potatoes before adding the peppers. Italian sausage could be browned and stirred in to the mixture. Mozzarella could be melted on top. A fried or poached egg could be perched on top to make it a breakfast or brunch dish.